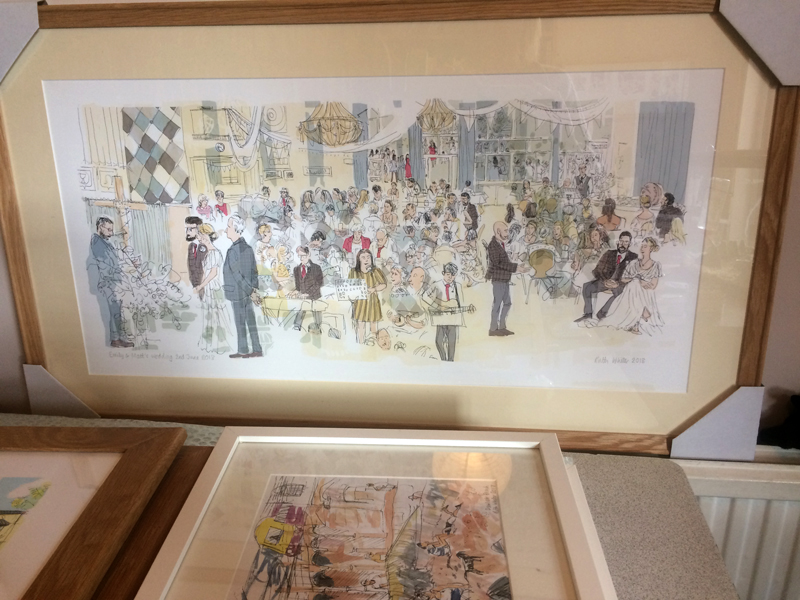 It’s that time of year again! I’m organising my show for Art on the Hill this coming weekend, 6th-7th October.

This year I’m especially grateful to Emily and Matt who have let me hold on to the framed composition of their wedding to show at the trail. It was the first of five weddings I sketched this summer.

Emily is a wedding photographer herself and she and Matt have a uniquely creative approach which was demonstrated by the way they could see that a 1950s school assembly hall would make a beautiful venue for their reception.

Normally, I fill a sketchbook during a wedding day and then the couple decide which scene they’d like for their final composition – the ceremony, the meal, the speeches, or perhaps a scene of everyone mingling and chatting. Emily and Matt came up with the idea of starting with the wedding vows at the left and moving through to the speeches and the queue for the fish and chip van who fed us all at the right hand side. This sounded like fun, but rather long and thin, so I came up with the idea of putting some parts of the day – groups posing for photos and the queue for fish and chips – outside the school hall’s large floor to ceiling windows. The raised area where I stood to sketch became the front of Counterslip Baptist Church where Emily and Matt were married. 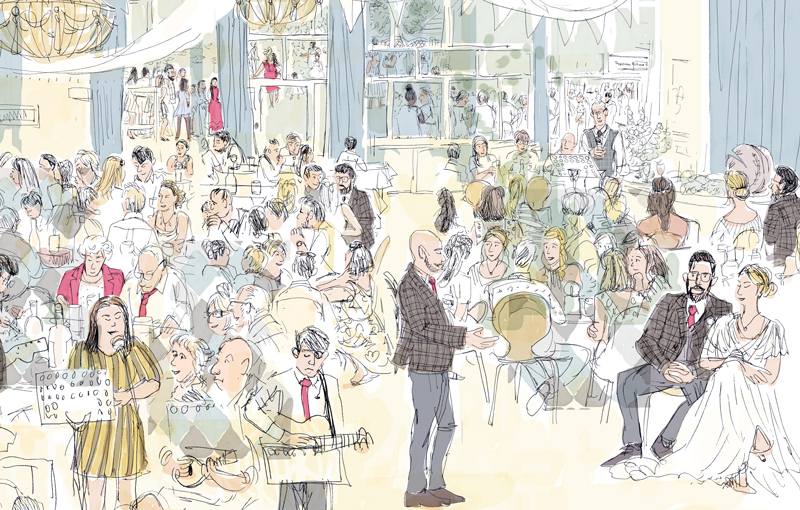 I love the fact that you can find Matt and Emily three times within this final composition. I’m also pleased with the layers of colour. I struggled for a long time to put colour on such a busy scene. Too many distinctive colour blocks can wreck a fine network of sketched lines too easily, destroying its unity and its complexity. After lots of experiments, I duplicated some of my colour layers, rotating and moving them so that patterns and colour elements are repeated, drawing the whole scene together and adding to the sense of busy excitement that is exactly what I remember from the day.

If you’re local do come and have a look this weekend – details of the trail at www.artonthehill.org.uk 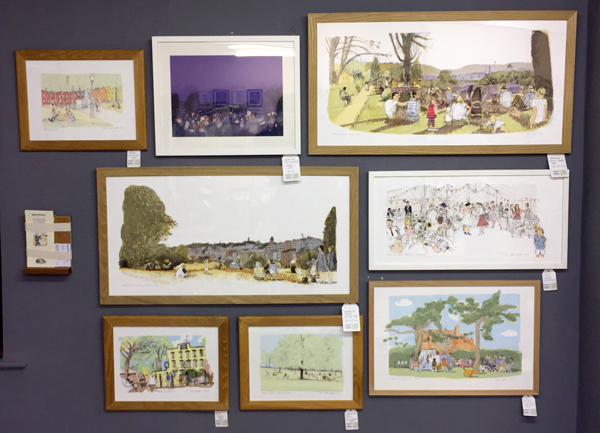 For the next few weeks I have 8 framed illustrations on display at Craftisan on the Wells Road (next to Cemetery Road). So if you saw something you liked at Art on the Hill or the Front Room art trail, you could still pop in there and buy it. 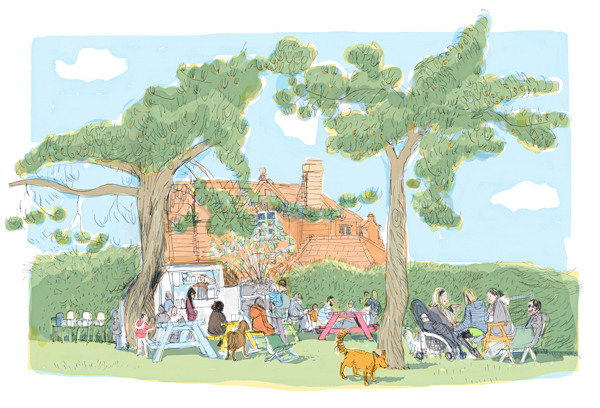 Emily (not the one in the picture above, the one who runs Craftisan), is absolutely not paying me to add that she serves extremely good coffee, and that Craftisan is a great place to pick up those odd extra presents that have to be unique and crafty and interesting.  So go and have a look! 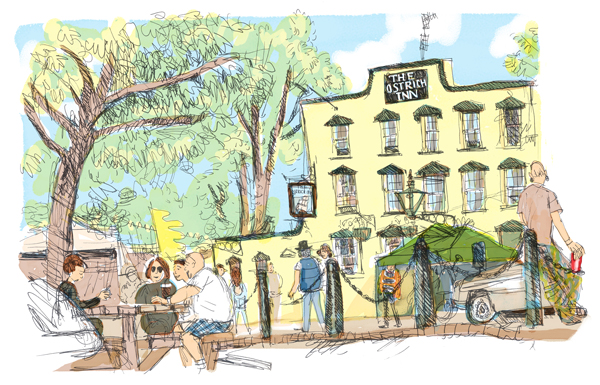 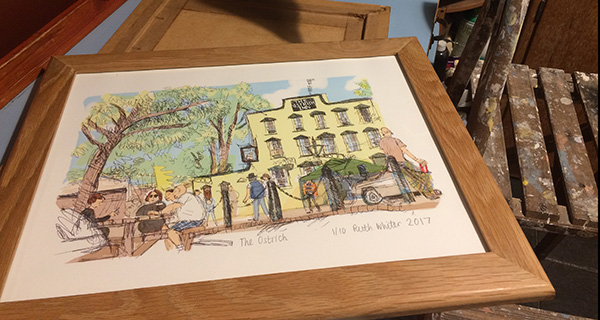 I am up late framing things for Art on the Hill. Meant to remind you all to come days ago but have been busy.

I’ll be showing a selection of new framed prints plus my folio of wedding and other sketching commissions, some cards, and some brand new Victoria Park wrapping paper to buy alongside a reprint of the Choral wrapping paper that was popular last year. 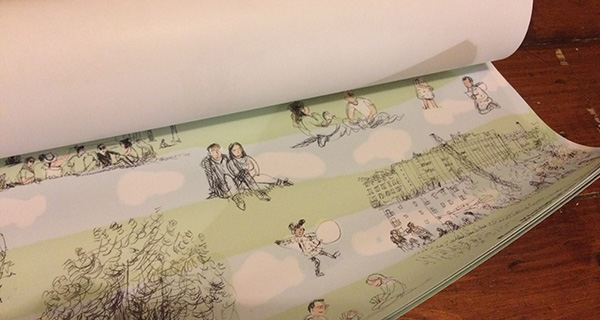 Also in our house will be Dear Gussie! and her amazing reclaimed textiles, and photos by Chris Townsend.

All the information you need about the art trail is at www.artonthehill.org.uk.

We look forward to welcoming you! 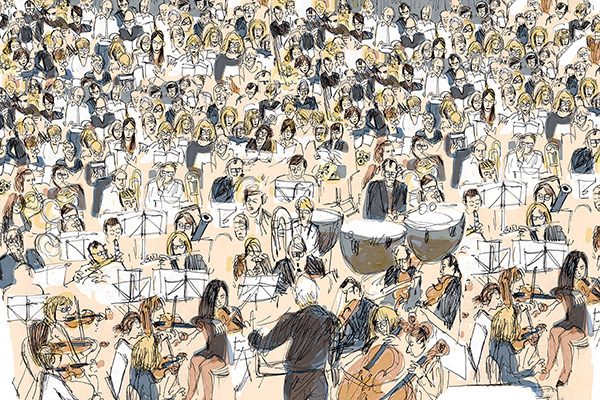 For the 10th year running (!) I shall be part of the Front Room at tbc (Totterdown Art Trail) exhibition during the Totterdown Art Trail next weekend. I’ll have lots of prints on show as usual, and some greetings cards, but for the first time I’ve had wrapping paper printed!

This design is based on sketches of the Brahms Requiem concert at St Michael and All Angels Church, Windmill Hill, on the 2nd October, with the Windmill Hill Chorus and Orchestra, Conductor Mark Randall, Soprano Helen Roberts, and Baritone Martin Le Poivedin. I’ve been to several of these concerts which always coincide with the Art on the Hill trail, so I’m always exhausted, but they’re always amazing. Such a tiny community putting on its own orchestral concert is remarkable in itself, but after Handel’s Messiah and Mozart’s Requiem I did kind of wonder whether this could match up. It did – the chorus and orchestra produced what I can only describe as a wall of sound – different as it may be from the Spector version. It was all encompassing and engrossing and kept me scribbling until I’d drawn almost every singer and musician. Since then, I have to admit, I’ve saved Brahms Requiem on Spotify, and with this week’s news, I’ve found its sombre tone has fitted the mood especially well.

My normal method, once I get the sketches home, is to scan them and create a composition. Usually I try to include some context for the people I’m drawing — buildings, roads, trees, horizon, etc, and these give structure to the composition. This time I just had a bulging spread of people that didn’t quite work on its own. At the same time, I’d noticed that the printing company I use for cards was offering to print wrapping paper.  I wondered whether any of my images would work as a repeating pattern, and tried copying and pasting these musicians around an A2 canvas. The result felt like the concert itself, evoking that mass of harmony.

So I’m offering this work as ‘Choral wrapping paper’ – it’s going to be a very inexpensive way to get buy one of my prints, at just £3.50 a sheet, and would make excellent gift wrap for a friend in a choir! 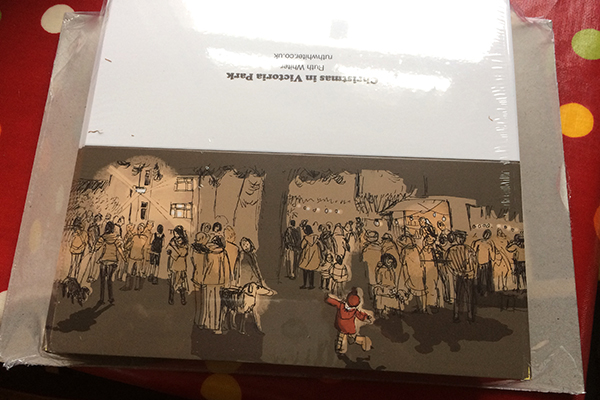 I’ve also had plenty of Christmas cards printed – using the image of Carol Singing in Victoria Park a couple of years ago. If you can’t get to Front Room, and would like some of these, please let me know. They are £2 each, or I’m willing to sell 10 for £15.

I’ll be in the Jarman Hall at the back of Totterdown Baptist Church, Sydenham Road, from 12 to 6 on Saturday 19th November and 12 to 5 on Sunday 20th November. Hope to see you there. 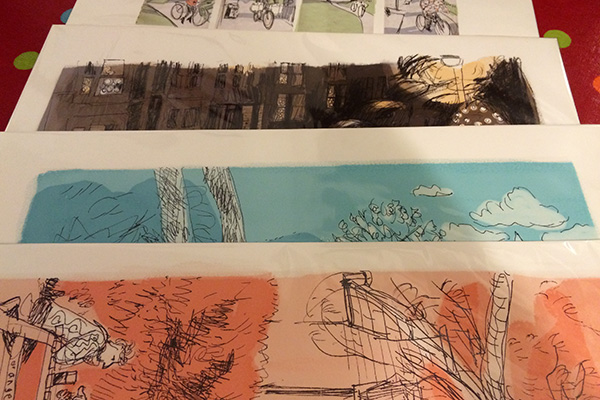 Yes, I’m dusting bookshelves and wrapping prints in cellophane in the hope that you’ll visit on Saturday and Sunday!

Find me at www.artonthehill.org.uk, venue 17 on the map.

Also showing here, Mary Yarwood of Oh! Gussie and her beautiful upcycled textiles. Mary will be bringing two cushions she’s made for me using the pillowcases my Great Aunts used to spend their evenings embroidering.

Annabel Glassby will also have some of her lovely paintings in the hall.

Front Room, the Totterdown Art Trail, is this weekend. It is always a magical experience – don’t miss it. As usual, I shall be at Totterdown Baptist Church with 15 other wonderful artists/craftspeople, and also live music, real coffee, and cake. We are open 12-6 on Saturday, 12-5 on Sunday. More info at www.frontroom.org.uk 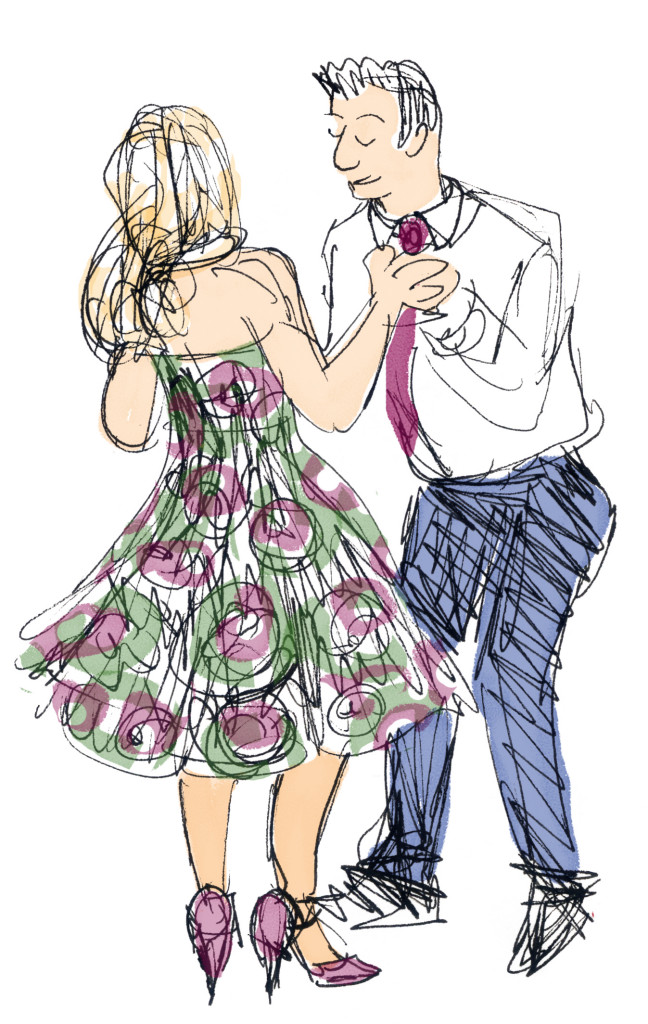 Taking a short break from cleaning under the stairs – because it’s Art on the Hill again this weekend.

As always, the sun is going to shine, we will have a new guest artist in our front room, and I will get to say hello to everyone I know on Windmill Hill!

That’s what makes getting five or six new illustrations printed and hung, somehow, on the wall, all worthwhile! 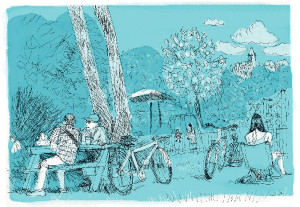 Really enjoyed Front Room this year. The weather was good, we had just the right number of artists in the Salt Cellar at Totterdown Baptist Church, and some lovely music. I didn’t get out much and when I did I headed to Stevens Crescent which is what I always end up doing. It’s always worth it just for Susan Black’s subtle and moving greyscale paintings of old photos, but I also loved standing in the middle of a room full of Darren Hoskins’ powerful pastel cityscapes. Don’t know how he gets that energy from photos. Somehow he can store what he’s seen in his head.

I’ve been trying to draw from the balcony in Totterdown Baptist Church for years. I was thrilled when the picture above appeared in my sketchbook, it’s the nearest I’ve got to capturing the energy of worship in that space.