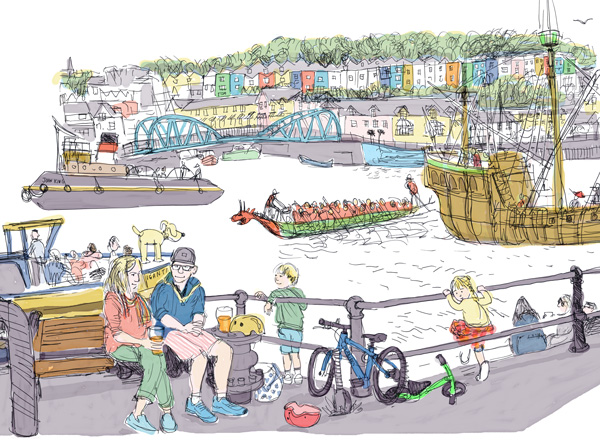 My friend Lisa was talking about gratitude this morning, about stopping and being thankful for the ordinary things  we have.

A few weeks ago I drew Lisa and her family in their living room on a wettish Saturday afternoon. Three of them played Destination Hogwarts – the fourth stayed on his device on the sofa most of the time, although to be fair he was joining in with Uno later on. This is the family portrait I put together from those sketches. I’m not as good as Grayson Perry at including cultural references we’ll all recognise, but Lisa and her family will hopefully recognise all the familiar bits and bobs around them in this picture. Maybe it’s a good way to count your blessings – your children, cats, board games, family heirlooms, cushions, and console games.

The next Saturday was a bit brighter, and I met Victoria and Marcos by The Cottage Inn to sketch a family portrait for Marcos’ 40th birthday. They wanted to show the kind of Saturday family activity they enjoy, so the kids brought their bikes and co-operatively cycled round and round in circles while their parents enjoyed a rather early pint of cider and I tried to draw everyone.

Like some kind of carefully staged Bristol tourist video, though, it was all happening on the water. There were dragon boat races going on with teams from all over the country. The Matthew (Bristol’s replica of the 15th Century Caravel in which John Cabot sailed to Newfoundland) passed by full of pirates, so did the 1935 diesel tug  John King, and so did the Bristol Ferry Brigantia with Gromit at the helm. There was so much to see, we let Oliver and Sophie put their bikes down and watch from the railings. 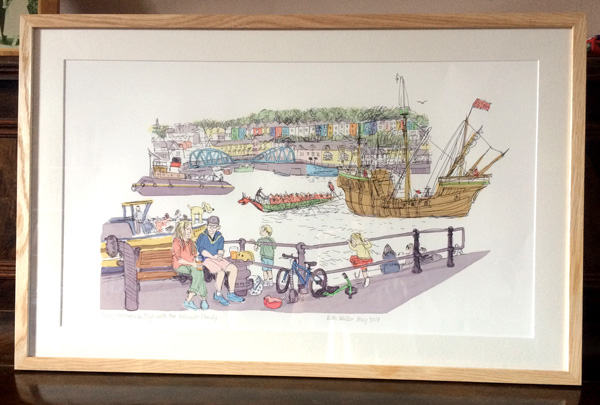 If you have an interesting idea for a family portrait, then do get in touch for a chat.

(Fun fact: The two cats in the indoor portrait are also called Ollie and Sophie!)